People first settled here permanently in about 250 B.C.E. until around 1000 C.E. The reason why people now could start settle here is because the river Niger (which the city is build nearby) due didn’t any longer have high land that regularly escaped inundation (översvämning). The climate around the Niger was different that what it is today, they could because of the shallow lakes and grassy plains have farmers. This made it possible for them to produce rice which is revolutionary - But we’ll get to more of that later on!
Other ancient civilizations might have extinct because of war, however that’s not the case for Djenne Djeno. It is believed that around 1000 C.E. the environment became markedly drier and simply not possible for them to live there any longer.

Djenne-Djeno is the oldest known west African city. The city was built up of many groups of huts made of mud-brick which is quite advanced. The huts were placed in groups where the husband lived in a large hut in the middle, while his wives (yes, wives in plural) lived in smaller huts surrounding this one. Djenne djenno had an area of 80 acres surrounded by a massive wall! None of the larger settlements in this area had had this. The wall was three meters wide, four meters high and had a perimeter of 2 km! By 1000 CE, there were fifty thousand people living in the city. We don’t have any pictures of the city plan, but imagine 50 000 people living peacefully within a surrounding wall. This is next to a river, fields for farming and huts outside the walls that’s for production of iron (we’ll get to that later).

While there were many groups of huts, there was no central, powerful building. There wasn't any palace or any religious temple of any kind, despite the fact nearly all ancient cities are based around these monuments of power.
They use of domesticated plants and animals, in other words they now raised e.g. sheep and goat which they could get meat, fur and milk from.
As we mentioned, the people of djenne djenno produced rice. It simply had the perfect ground for rice to be produced.

Terracotta:
We don’t have any primary source in form of written languages instead we have this little terracotta statue that our group became really fond of so we named him Ben. Ben here is special for Djenne Djeno while Djenne Djeno was famous for its terracotta productions. However, the interesting thing about Ben is his face expression.

If we look closer it looks like he’s thinking about something and that the thought is weighting him down. Maybe he is thinking about his girlfriend that left him the other day or maybe he just dropped his lovely rice cake on the ground and now he can’t eat it. In Djenne-Djenno and at the many related neighbouring sites in the Inner Niger Delta archaeologists have found terra-cotta sculptures of human and animal figures: men riding horses or entwined by serpents, figures sitting or kneeling, their bodies covered with what looked like blisters or welts.

However, what all these terracotta statues have in common is that they all look very sad. We don't know why they look sad, but by discussing it in the group we believe that it perhaps has something to do with their hard everyday life of harvesting and so on, or maybe even more interesting; with their religion. Perhaps they made these figures sad because it was related to something depressing, like when a person dies, then maybe they buried these statues with the dead. Well, we don’t know what is making Ben, here, sad or what he’s thinking of and that’s what makes it interesting because he looks sad and no one knows why, not even the scientist can figure out why he looks so down. Scientists and our group of course have had to come up with theories based on the little information that we have and we can’t really prove these theories because we have no written record to base it on. So it is all a big mystery really. 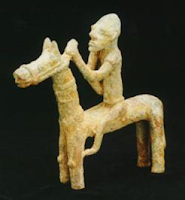 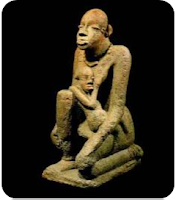 Our other primary sources are:


Cotta clay beads. The beads appear to be spindle whorls, from the deserts of Niger.  Someone has carved two lines (as you can see on the pictures) in one of them but the others are in excellent condition. Scientists don’t know what these beads were used for but considering the shape and they have been formed very preciously we presume they might have been some sort of jewelry. 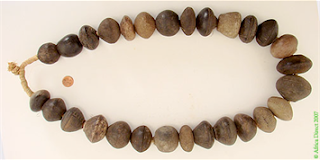 They also made these old and unusual terracotta beads. The origin of these beads is uncertain, but it is believed they are from Djenne Djeno and they were used to weigh down fishnets.

Once again we can draw the conclusion that Djenne Djeno is a very mysterious city and at the same as it might seem annoying it is preciously that mystery that makes it so interesting.

Evidence has been found and architects believe that the first settlers knew how to manufacture iron – revolutionary! There has been found workshops on the periphery of the Jenné-Jeno settlement which were used for smelting. It may have been that the smelting process was either too secret or perhaps considered too dangerous to be done in the city itself. These workshops appear to have been so sacred or ceremonial area. In other words, this place was also used for offerings of terra cotta statuettes of human and animal forms.

After smelting, the iron was brought into the city to be forged into tools which would replace stone tools and ornaments such as jewelry. It is also believed that they used these new tools for fishing in the river Niger. This iron is probably possible to produce because of the climate, in other world the hot African sun.
The residents of Jenne Jeno had a lot of contact with other cultures which can be seen in the fact that they have similar terracotta statues in other civilizations such as the Nok people. The rice, raised cattle and iron the city had was probably also used for trades of goods for e.g. gold and copper.


Theories:
So, are the theories of Wheatley, Mumford, Lerner and Marx applicable to Djenne-Djeno? However, for some of them this is due to lack of evidence.

Wheatley argued that ancient cities must have a religious center which had control over the economy and administrable activity, maybe with a religious leader and perhaps some future predictions.
Djenne Djeno, on the other hand, had no religious center. They had religion, but it was centered on ancestral worship. They also didn’t have religious leaders, as there is no evidence of hierarchy. Nor did they preform any sort of magic and by that we do not mean pulling-a-rabbit-out-of-a-hat-magic, but predictions of the future. For a civilization to consist with Wheatley’s theory the people of the civilization also had to preform some sort attempt to communicate with some sort of gods, but Djenna Djeno didn’t have that kind of religious belief. We also haven’t found any evidence of the city having some sort of religious buildings such as temples to please the gods. So we can draw the conclusion that Wheatley’s theory does not fit our civilization.

There is no evidence of warfare or conflict during the span of Jenne Jeno, therefore we discredit Mumford’s theory that urbanization leads to continuous warfare. People either had to be SLAUGHTED for this theory to be true or have any religious reasons to fight. However djenne djenno have no evidence found of conflicts/ warfare, no mass graves found, no weapons found and no written records of war found. The only toold found are the ones used hunting, fishing and agriculture.

Karl Marx theorized that when we move into cities – we change and get a hierarchy in society. Also that the different groups of the society would conflict.
We have evidence that there’s different groups such as farmers, blacksmiths (metal workers) and probably fishermen:  but there’s no sign of conflict between them. There’s also no evidence of hierarchy, for example building, graves and architects have found and believe that all households had almost the same amount of wealth if you go by the size of the huts and the value of the goods found in them.

Lerner claimed that the subordination of women began in societies when conflict became an important part of suburban life and strong men began being valued higher than women who did not have the same physical capability. However, as we mentioned earlier, there is no evidence of such conflict in Jenne Jeno. If the theory states and confirms Mumfords theory that patriarchy rose because of armed conflicts which women were unable to participate in and therefor lost power, then the theory doesn’t fit it because there is no evidence of conflict and we must therefore discard her theory because of lack of proof. Though, we can be fairly certain that women had a secondary role in the civilization seeing as the polygamic (one man with many wives) family constellation focused on a patriarch (big centered hut) with several wives (smaller surrounding huts).

From what we have said, we can draw the conclusion that Jenne Jeno was a very unique society.

Story of how a day for a Djenne-Djenno civilian could look like:

"One beautiful day, a young Jenne-Jeno civilian woke up with the sunrise - before the hot sun had struck with full force. Sitting up in the bed, he started to look around the hut where he lived and started yawning and stretching. He got up, dressed for the coming day and was now up and ready for a new day of hard labor to begin.

When he got out of the very characteristic building for this period: the mud-brick hut, he could see his three wives waving and wishing him a good morning from their three separated huts that surrounded his great hut. He waved happily back to his wives, reminding himself how incredibly handsome he must be to have such three gorgeous wives greeted him every morning.  He left his house and wives as he starts walking to his job.

You see, his father wanted him to be the greatest blacksmith in town. However, this young man had other dreams. So he simply followed them and became what he always wanted to be – a rice farmer. Funny thing is: farming rice would become a very unique, significant event that took place in Jenna Jeno. He wanted to work on the fields, use awesome tools to grow large amounts of rice every day. In fact, he grew so much rice that he didn't even need to keep it all. With the rice he had left over he was able to trade it whenever merchants came to town. He usually traded his rice for some gold and copper, so he could get his wives some beautiful jewelry they could decorate themselves with.

At the end of the day he returned home where his wives had made him his ordinary dinner: Fish they’ve got from a friend that works as a fishermen at the river Niger by the village, along with some rice and goat milk. Happy as he is, he returned to his hut tired after a long day and fell asleep with sweet dreams.

And so his life continued, day after day, year after year until…. He one day died. On the day of his funeral, all his friends and wives gathered in his hut to say goodbye. Then they put some of his favorite terracotta statues with him as they buried him under his hut.